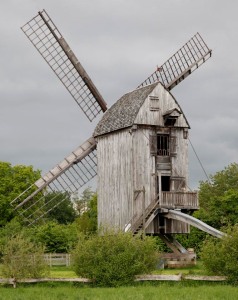 Our house is a typical German two-family house, with both upstairs and downstairs. The house is relatively modern with an older section somewhere downstairs. The plan and construction (red brick) is based on but not similar to the Low German farmhouse that typifies the district. The latter were built very much the same from the 18th to the early 20th century but are modeled on a much older house style from the late 15th and sixteenth centuries (more about this later). It is on about one and a half acres of land.

We are living on a brick-road leading into fields and country, near Sage Haast a tiny hamlet with a petrol station, a hotel with a guest house next door and a seedy looking sex nightclub (supposedly 35 years in the business). The hamlet is spread over one kilometre. It is about 4 to 5 kilometres from the small town of Großenkneten, which has two supermarkets and a railway station, a couple of restaurants and a few other shops and businesses.

We were lulled by the warm sunny weather in our first few days from 28 April. Then we broke the ride on mower and fixed it on 6 May. The rain started on 7 May and has been raining at least some of every day (you work around it) and been colder. Tomorrow on 15 May we are supposed to be in for several fine warm and cloudy days, and we may be able to finish the mowing.

The upstairs of the house is a self-contained unit, the equivalent of a large three-bedroom home. Although smaller than downstairs, we think it is much nicer with a 360˚ view of countryside. The only downside is the relatively steep stairs with two steps at the top larger than the rest, which is why Ernst and Sylvia don’t live up here. 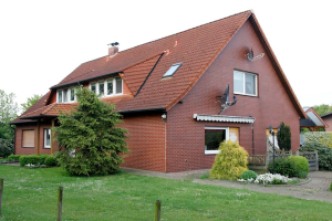 Rooms on the east and west have the angle of the roof at one end. The living room is large with a large window facing South and two angled windows. It faces the garage block and several fields. There is a huge barn just to the left where Ernst and Sylvia keep their travelling home an American surplus bus. The kitchen next door is large and modern (glass top stove, dishwasher) facing west towards a small triangle of forest, where we see most of our large birds. The bathroom with toilet is huge and has a heated towel rail and floor. The fittings are much better than Australian ones on average. There is also a large second toilet both facing west. Beyond them is a smaller bedroom (not small) with only one sloped window. The master bedroom is at the opposite end of the house to the living room, large also with a walk in dressing room. The nicer guest bedroom faces east. Both have outlooks over fields and trees. In the centre is a huge area of mostly wasted space, with a utility room and another closet room containing the hot water system. Downstairs is the washing machine, use of large computers if we want, DVD and TV with many satellite stations. Our upstairs TV is programmed to BBC and ITV English stations. 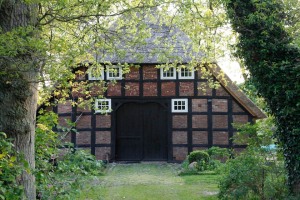 There isn’t a huge amount of furniture, but the three rooms we use most, living room, kitchen and bedroom are very comfortable. The space is airy and full of light especially when the sun is out. The windows are the lovely double glazed two-way windows typical of Europe (France and Italy also) that open from the sides and also from the top. Our impression is that this is a relatively wealthy area, though the towns have smaller houses.

Our hosts have been living here for only 18 months. 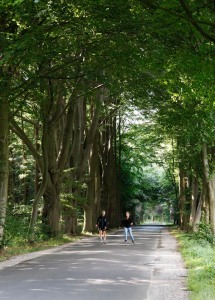 We are in the middle of a nature park ‘Wildeshauser Geest’ with its natural environment in parts and prehistoric remains. There are plenty of walks and bicycle rides nearby through fields and forests. In the later part of our house-sitting, we often took Motek the Swiss Shepherd dog for long walks around the district. Only a few kilometres away are the Ahlhorn fish lakes originally built in the 1880s as a fish farm they are now a forest nature reserve and lovely for walking and cycling.

Nearby interesting towns are Wildeshausen (a small town with old buildings and pleasantly surrounded by a medieval moat system), Dötlingen, Cloppenburg (a larger town with the outdoor museum) and Oldenburg (a very pleasant small city) all 20-30 min away by car. Not far from Oldenburg is Bremen one of the old Hanseatic league ports (a small historic city) and an hour and a bit by local train from Bremen is Hamburg another Hanseatic League port. The coast to the North is also about an hour away by car. In the opposite direction is Osnabrück another rather lovely small city.

We hear many songbirds on our walks and bicycle rides but don’t see many of them. We’ve heard the common cuckoo and seen common pheasants. Supposedly we’ll see cranes and hear nightingales later on. Out our windows we see common birds, but not too us: the ubiquitous common wood-pigeon, is a large attractive bird, the green woodpecker, woodlark, common magpie, collared dove and various others. 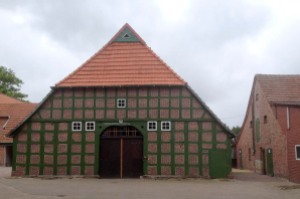 This area is a nature reserve and there is a large Wadden Sea National Park on the coast and East Friesen Islands full of varied water bird habitat just north of here.

The region was well-populated in the neolithic and megalithic eras. We ran across our first megalithic gravesite (boulders on mounds, a bit stonehenge like) early on aged 3000-3500 BC. There are many in the district including some famous ones. There is a megalithic cycling and motoring trail around this area of Lower Saxony.

The megalithic was the start of agriculture in this region. Jumping forward the type of farming and dwelling still common here began in the fourteenth century. Although the farming much earlier wasn’t too dissimilar. 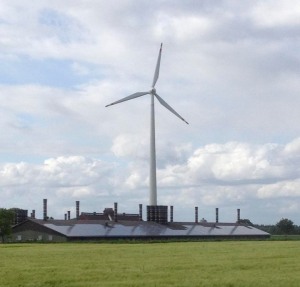 The soil is sandy but productive, if supplied with nutrients by alluvial flooding or ‘muck’ from the sheds and barns. The farmhouses are often very large. The fields vary but many are also large (a few hectares). Virtually all the fields and most roads are flanked by trees. Old windmills were typical of the area in the past and around us now are a number of wind turbines. This area of Germany is quite flat. 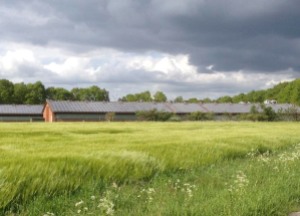 Every farmhouse including our own has a large and I mean very large solar array on a southfacing roof. This is located either on the house, sheds or barn. These feed into the grid and minimise electricity bills. Until recently, the solar panels were subsidised by the Government, as thatching is still on the older farms. Considering, the part of the world we are in the use of solar makes Australia’s efforts look pathetic. I remember even in Turkey each apartment block had solar panels on the roof but they were not as big as here in Germany. 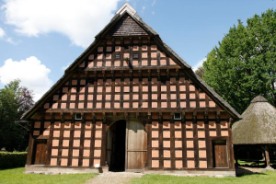 Around the area we see many historic buildings typically houses and barns that are either authentic Low German houses or descended from them with their typical red brick façade built into a wooden frame. We were privileged to live within a half-hour drive from the Cloppenberg open-air museum village with its collection of more than 60 buildings from all over Niedersachsen or Lower Saxony set-in 25 hectares of land.

It has the aim of preserving the culture, artifacts and buildings of pre-industrial rural life in the Lower Saxony Region. We suddenly began to understand the houses and barns we were seeing around us and the origins of the Low German house in Lower Saxony from the sixteenth century. The earliest dwelling displayed in the open-air museum is a wheelwright’s house dating from 1564. It is in Lower Saxony (Niedersachsen) that the Low German House developed and spread from there to other flat farming areas of Germany. The earliest versions appeared from the 13th to 15th centuries. Two Dutch ones have been dated to 1386 and 1262. 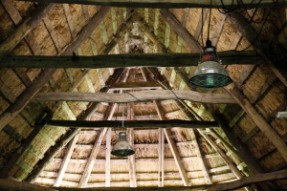 The Low German farmhouse or Hallenhaus is basically a solid wooden framed structure filled in with wattle and/or daub early on and red brick from the 19th century. We’ve only seen the red brick type outside of the museum and they are common. In the area we live area most farmhouses date from the mid-nineteenth to early twentieth century. One of the neighbours, however, has a farmhouse dating from the early 18th century (though also brick in-filled now), which he says he’s been renovating for 35 years. 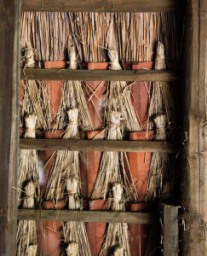 The house is roofed in terracotta tiles or thatch or a combination. There are often large barns and outbuildings. But the basic structure is a large barn at the front and the house at the back. Generally, before the mid-nineteenth century with an outside hearth and living area at the end of the barn just outside the house.

These were probably quite difficult to live in until the eighteenth century, but became better thereafter for rich farmers, and quite comfortable in the mid-nineteenth and early twentieth centuries. Despite mechanisation, the basic farming practice in the region probably hasn’t changed much since the 16th century. On new lands, one had to dig out the peat before one could farm. There were groups called colonisers right up until the early 20th century who developed new lands. The peasants in Germany didn’t live that comfortably right up until the early 20th century. 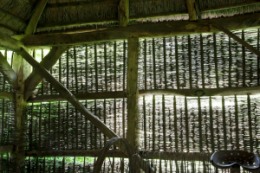 Ernst and Sylvia when they returned from their trip took us to an open-day at an excellent local, historic peat museum, which gave us further insight into the local culture up until the 20th century. The practices were very similar to those still pursued in Ireland.

Note: Ernst and Sylvia have read and kindly allowed us to reproduce these reminiscences.